Lessons on Labor and Consumption from the City Beautiful 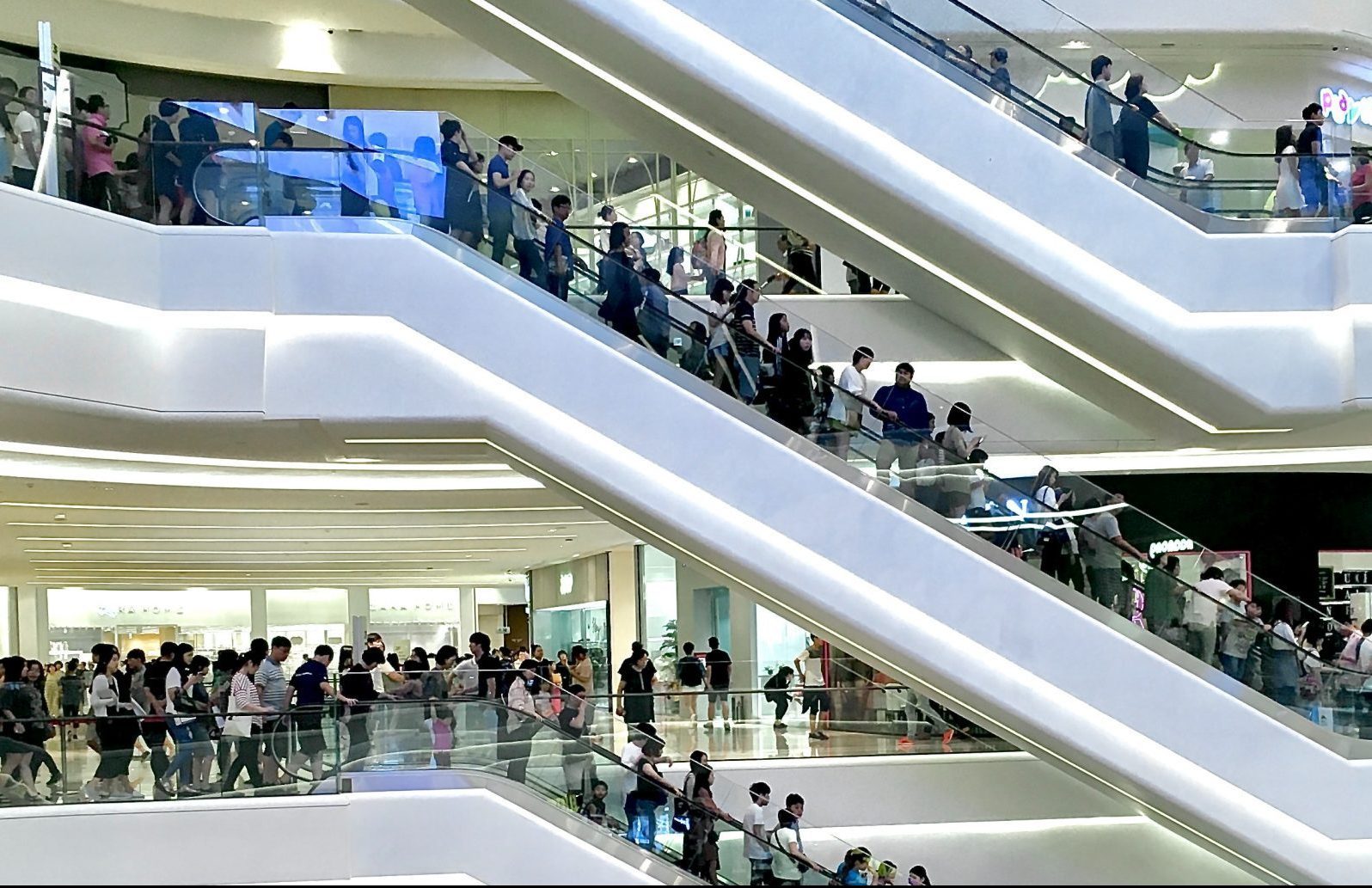 Today’s post-Labor Day piece is about the labor market and consumption, but let’s start by indulging in some small sample-size anecdotes.

I’ve learned many lessons about the global economy over the years by watching the dynamics at play at the outlet malls in Orlando.

First, Orlando itself is essentially beta on the global economy. Though it is becoming more diversified, tourism and leisure still make up 41% of the economy, or about $75B. This means the town is at the mercy of highly discretionary consumer and corporate demand. This spending typically experiences greater swings through cycles and creates boom and bust conditions in the local economy.

Tourists from all over the world come to spend their money in Orlando, whether it is to brush shoulders with the mouse or to take advantage of the area’s substantial discount shopping offerings.

For years I’ve been getting a feel for global cycles by asking the salespeople at the outlets: “Who’s shopping?” Fifteen years ago the big shoppers were tourists from the UK, riding high on a GBP trading near two-to-one versus the USD. Ten years ago it was tourists from South America, still flush from the emerging markets boom and enjoying strong currencies. Then came the tourists from the Middle East, but their spending started to recede along with oil prices in 2015. This was then replaced by an influx of spending by tourists from China. Maybe I should coin this as the GPI, or Global Purse Index…

One of the most startling outlet observations came from a visit in late May of 2020 when Florida was starting to reopen non-essential businesses. I was expecting the mall to be a ghost town, as it typically would be during a deep recession.

The scene was the exact opposite. The outlet was not just packed, people seemed near desperate to spend money. For the first time that I had ever seen, there were people lined up for over four hours to get into the ultra-luxury stores.

Whether this was due to a boost from stimulus checks, a redirecting of spending from services to goods, or that the pandemic did not hit higher income groups as hard (four hours was about the wait time for food banks as well at the time), what was very clear is that this was not your typical recession.

Interestingly, fast forward to this past weekend, a should-be-busy holiday weekend, and that four-hour wait for fancy belts is gone. You can just stroll right in (store capacities have not been raised meaningfully enough to account for the shortening of wait times).

So, what is the point of these highly localized anecdotes?

We need to watch consumer spending closely through the remainder of this year as we enter into a more “normal” labor market environment.

As of Labor Day, over 7 million people in the U.S. lost unemployment benefits, with an additional 3 million losing access to the supplemental $300 of benefits (Washington Post).

There are divergent views on what impact this expiration of benefits will have on the economy. Some argue that the lack of benefits will draw people back into the labor force, while others argue that the hesitance to work may not be just because of higher unemployment benefits but other concerns like lack of access to childcare, COVID fears, and skills mismatch (the disappointing 235k vs. 733k est jobs number from last Friday showed evidence of the Delta variant weighing on leisure hiring). Some also note that these benefits may have put upward pressure on wages, essentially raising the “clearing price” for labor.

First, it could be too early to draw conclusions, but this WSJ analysis shows that states that cut benefits actually had smaller increases in nonfarm payrolls than states that kept benefits, meaning cutting benefits did not have a statistically significant impact on bringing people back to work. This could be partially explained by the fact that states that kept benefits tended to reopen later than those that cut benefits, meaning there was more room for improvement during this April-July 2021 period. Other analyses that controlled for demographics, marital status, and education found slightly more evidence of a boost to employment from the end of benefits.

Chart 1: The loss in unemployment benefits is not offset by higher earnings 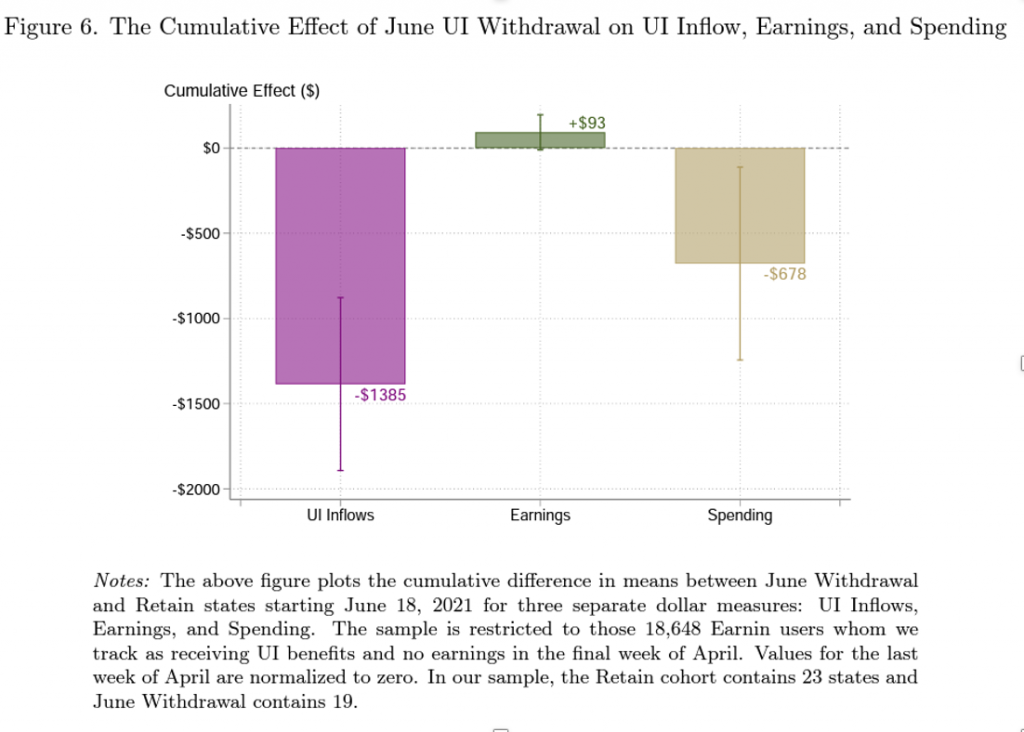 Taking this a step further, we note that the elevated savings rates experienced in 2020 have now returned to be much closer to historical levels (Chart 2), meaning we cannot count on the spending down of savings as much to buoy spending. 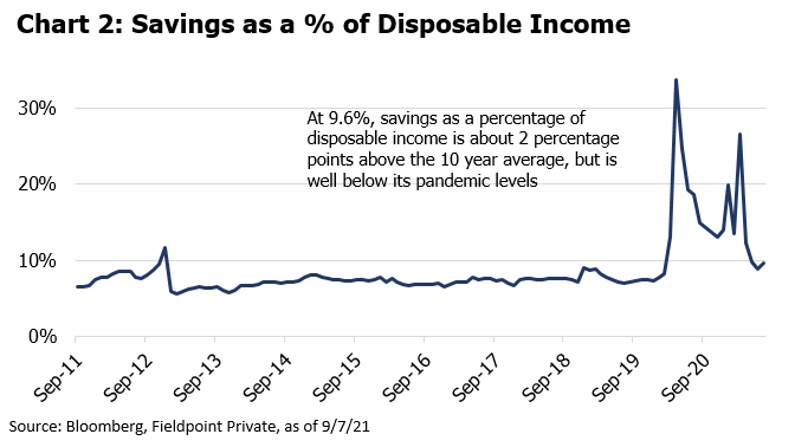 So no matter what camp to which you belong in the unemployment benefits debate, the potential hit to spending in the near term, which is 70% of the U.S. economy, cannot be ignored by forecasters and investors.

Economic surprises have turned negative (Chart 3), while the real-time GDP forecast from the Atlanta Fed has now fallen well below Wall Street estimates (Chart 4). All the while, corporate earnings estimates have continued to march higher. This divergence cannot persist as, eventually, the real economy catches up with earnings estimates. 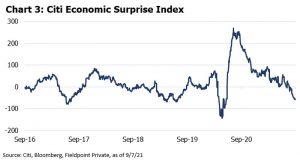 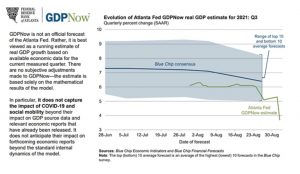 We also note that substantial incremental fiscal spending is already baked into many Wall Street GDP forecasts, so if further spending was to run into roadblocks, these estimates would need to be walked down.

The “good” news here is that weaker jobs and consumption data can allow the Fed to delay the reduction of policy support (tapering). This could be why we saw long yields jump on Friday’s weak data, as this could mean that the Fed will be inclined to delay tapering and let inflation “run hot”. This is a double-edged sword, as we have pointed out the past few weeks HERE and HERE, because while markets like the continued stimulus, the loss of purchasing power from inflation are having a meaningful impact on consumer confidence and spending plans.

So when we consider the potential hit to spending from the combined impact of the reduction in unemployment benefits and the pinch from higher prices, the lack of a wait time for fancy belts in Orlando starts to make more sense.

Of course, we do not say any of this as a “bet against” the U.S. consumer (which has been the wrong bet time and time again). Further, we note that the underlying economy remains relatively healthy with continued room for improvement (there are still 5.3 million fewer people employed today compared to prior to the pandemic). Also, wages are rising, which can help to offset some of these headwinds over time.

However, given the labor and spending dynamics, we outlined above, we do see potential that growth expectations could need to be level set lower. From a market perspective, these recalibrations can become even more potent when considering that U.S. markets continue to trade at elevated forward valuations, becoming a source for volatility for equity markets.

But then again, maybe all of those belt buyers have become dip buyers, allowing the U.S. equity market to continue to shrug off weaker data. Time will tell.