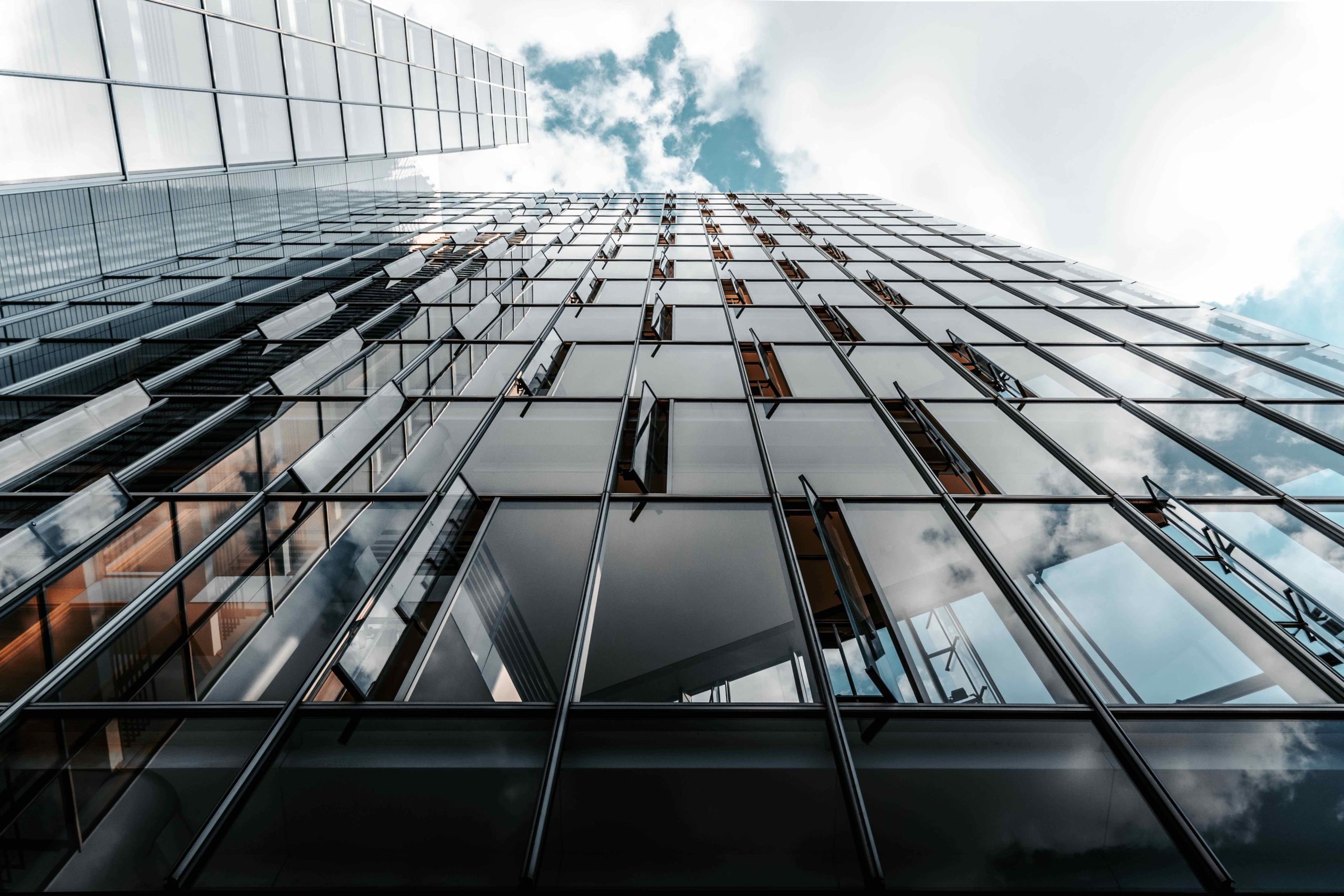 The Maginot Line is one of the most well-known and glaring examples of a false sense of security (of which it has now become synonymous), as well as the perils of fighting the last war and not the next one.

The Maginot Line was a chain of steel and concrete fortifications built by the French after WWI to protect its border with Germany from future invasion.  It was considered an engineering marvel of the time and led many to feel confident that its existence would dampen and even deter another assault by France’s long-time adversary.  Even Winston Churchill, who toured the Line in 1939, wrote that the wall meant “the French cannot be surprised.”

But less than a year later, in May of 1940, the French were certainly surprised.

Essentially, the Germans went around and over the heavy fortifications of the Maginot Line, using their advances in mechanized warfare (and not the tactics of WWI, against which the Line was designed to defend).  New armored vehicles thrashed through the dense Ardennes forest of then-neutral Belgium, which the French assumed was un-crossable, and the shocking Luftwaffe simply flew over the Line.  The Germans proceeded to attack the Line from behind and take nearly a half-million prisoners.

In a mere two weeks, the invading Germans forced the retreat at Dunkirk and in six weeks Paris fell, ending France’s offensive capabilities for the remaining five years of the war.

The failure of the Maginot Line is a stark and extreme lesson of being lulled into a false sense of confidence.

All of 2021, the S&P 500’s 50-day moving average has seemed an impenetrable line of defense for the index, fortified by an army of eager dip buyers that closed ranks every time the line was tested. These dip buyers were emboldened by a strong economic backdrop, robust corporate earnings, and continued liquidity support by the Fed.

The sense of impenetrability bred on itself and stoked urges to buy at the first sign of lower prices (in modern parlance this would be called FOMO, or the fear of missing out).

This sheer confidence in the index’s resilience and urge to “get in on the action” has led to record inflows into risk assets, with more money flowing into U.S. equities in 2021 than in the prior 20 years combined.  Just last week, possibly stoked by the weaker price action of the market, equities saw $50B of inflows, the largest since March.

But as the French found out in 1940, things can change quickly.

As of writing this morning (Monday the 20th of September), the S&P is trading decisively below this 50-day moving average for the first time since March (that March journey below the 50-DMA only lasted two days).

We have already traded down to the 100-DMA, down about 5% from the early September all-time high.  Receding to the 200-DMA would bring us down about 10% from the all-time high, still well within the bounds of a “healthy” correction.

Of course, it remains to be seen if this weakness will be sustained, deepened, or rapidly “bought to an end” (in true 2021 fashion).  But to be bought to an end, there have to be buyers looking to buy (as of the late afternoon Monday, buyers did step in to buy allowing the index to close off of its intraday lows).

We pointed some of the following charts out in recent Perspectives and posts, but they are worth revisiting together as we think about the perceived impenetrability of the S&P 500’s support lines.

The big, huge caveat with the following discussion is that these charts are not timing tools.  They have little statistical significance in predicting near-term forward returns.  However, they are powerful predictive tools for longer-term (5 to 10 year) forward returns.  Extremes in these measures can persist, but we completely ignore them at our own peril.

In order for the retail buy the dip to work, there have to be a lot of willing and able buyers to step in at the first sign of weakness.  They must have confidence and capital to step in and be the marginal buyer.  But we ask the question: how much money is left on the sidelines for the retail investor?

The following charts argue that there is not an abundance of dry powder. Instead, they paint a picture where retail investors look to be nearing a state of being fully invested (at which, of course, they can stay for some time).

First, Chart 1 shows the decline in MoM retail margin loan balances in July for the first time since the March 2020 market meltdown. 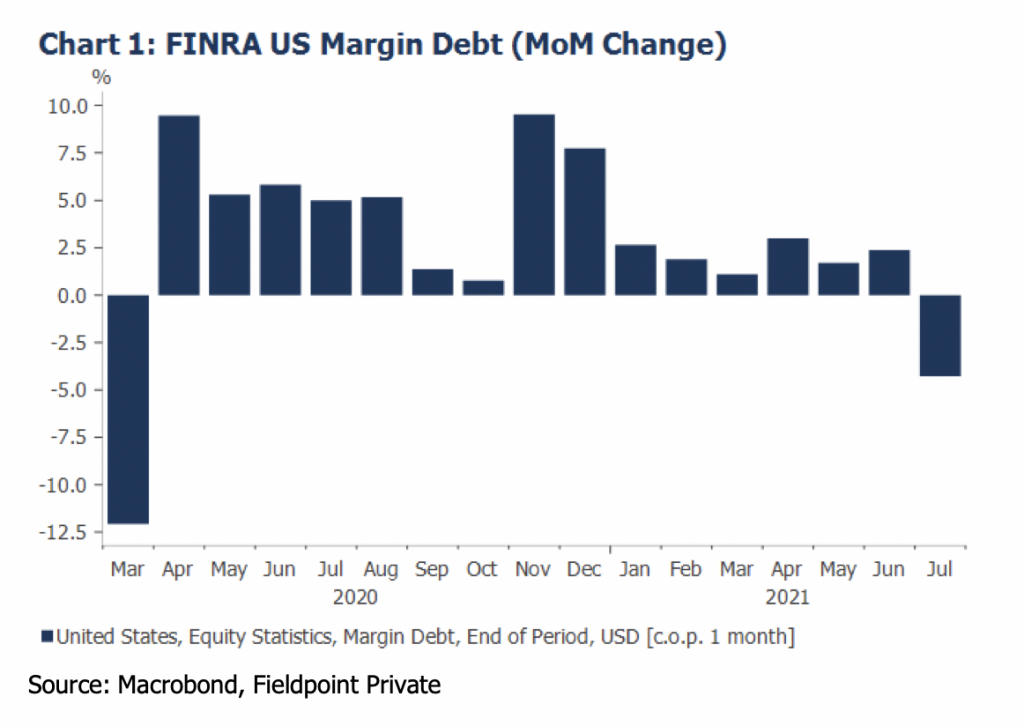 One data point does not make a trend, but if this continues, Chart 2 shows how peaks in margin loan balances have preceded corrections in the S&P 500 (2000, 2007, 2016, 2018).  If retail investors really are starting to pull back on taking on more risk, it could be interpreted that the marginal buyer may have waning confidence and/or capital. 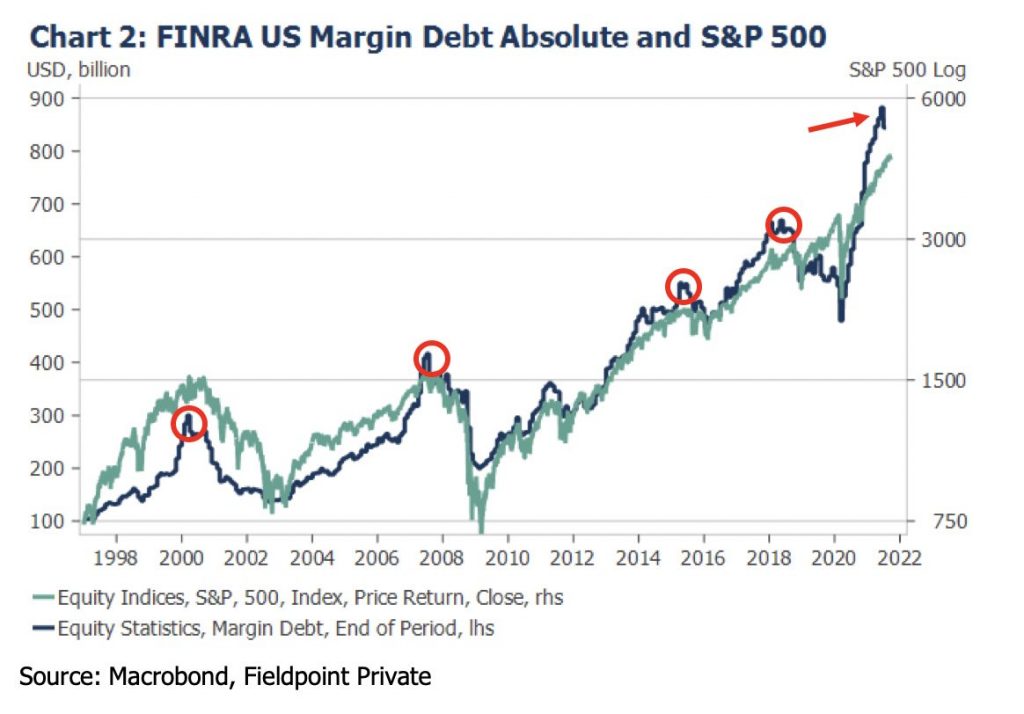 Charts 3 and 4 show how investors have near-record high allocations to equities but near-record low allocations to cash.  This is consistent with being late cycle, where the “wall of worry” has already been climbed and there is less money to be drawn into risk assets (you can contrast this with sentiment surveys like AAII showing bearish leanings, but watch what investors do, not necessarily what they say). 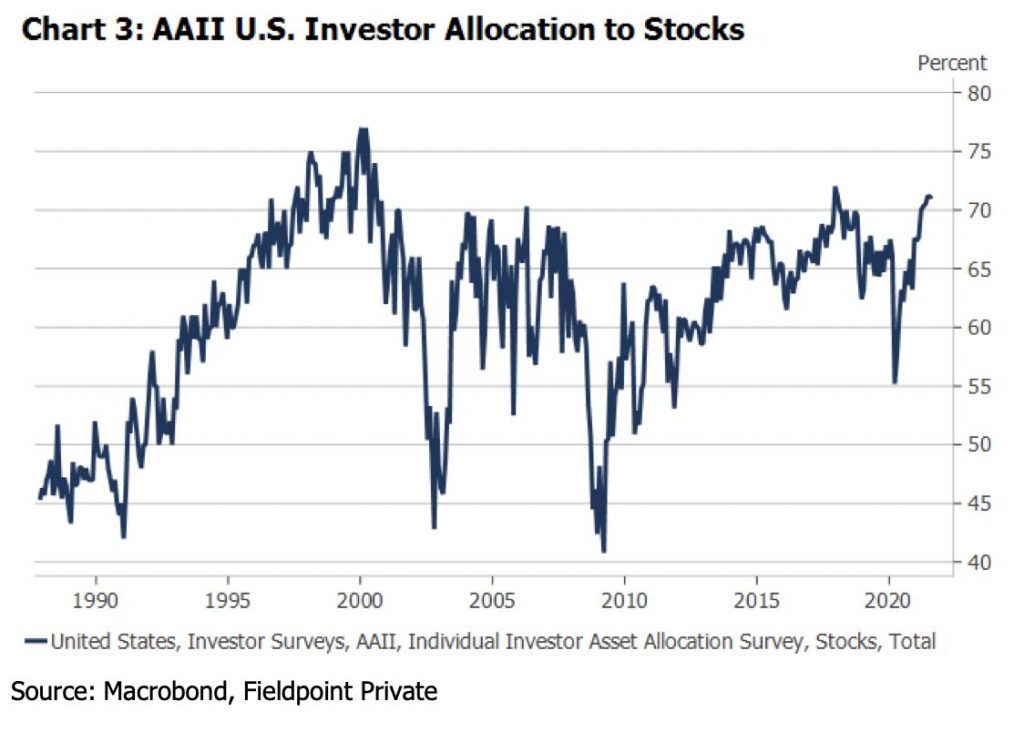 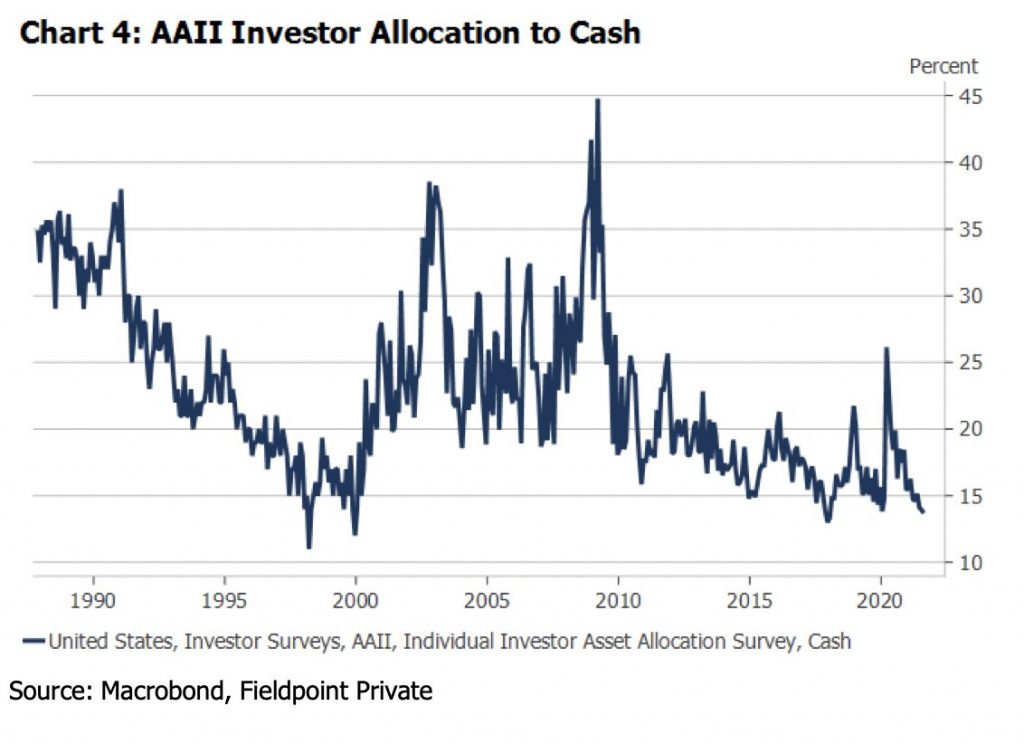 Chart 5 is a similar story, with equity as a percentage of household financial assets at a record high.  This particular data point has proven to be very helpful for predicting 10 year forward returns, with a high reading in household ownership of stocks consistent with low forward returns over the next 10 years.

Of course, there are many paths to get to “low forward returns” such as a bubble and burst or choppy sideways trading.  This does not argue for investors to stay out of the market.  Instead to be well aware of risk and tax exposures in order to accomplish return goals, at the same time as having a readiness to make volatility an opportunity. 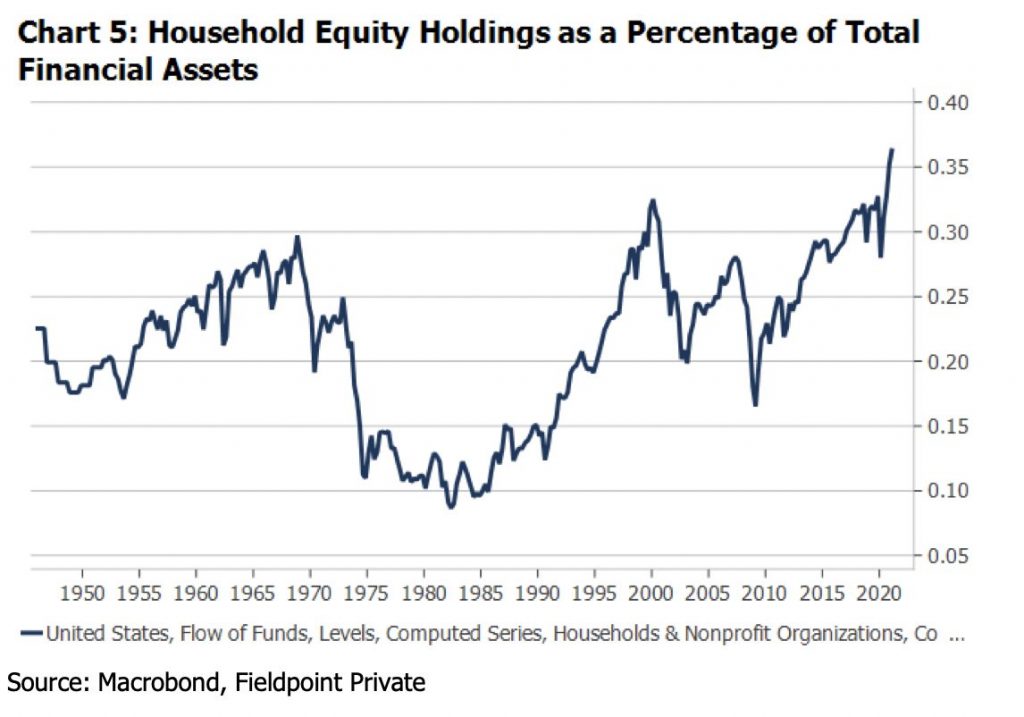 Lastly, Chart 6 shows how the savings rate as a percentage of disposable income has fallen from almost 35% during the pandemic to less than 10% today and is just above its longer-term averages. Significant excess savings may no longer be a large source of cash to fund trading accounts.

Overall, this extended positioning picture, in addition to all of our work on the weak breadth and a defensive appetite in the market, potential pressures on consumer spending, risks that higher inflation readings/loss of purchasing power could make the Fed tighten policy faster than it would like, challenges with the earnings growth picture (higher costs, revenues getting hit by supply chain issues), pressure on multiples from tighter liquidity, and exogenous shocks, like what is happening in China, we are not surprised that the S&P 500’s Maginot Line of the 50-DMA has finally cracked.

We still see a correction as buyable.  Importantly, the underlying economy is still solid: cutting growth estimates is not equivalent to flipping to contraction. Credit spreads remain benign, but a key watch item.

But given all that we have written above, we think investors should remain vigilant.  With valuations and expectations high there is a little cushion to absorb bad news.  There is still plenty of room for a sentiment to sour and positioning to lighten.  Don’t let the perceived impenetrable resilience of the U.S. market, and its incredible ability to shake off negative news over the past 18 months, lull you into a false sense of confidence that nothing can surprise this market.