The Hall of Mirrors: How Will Flat Yield Curves Impact Fed Policy? 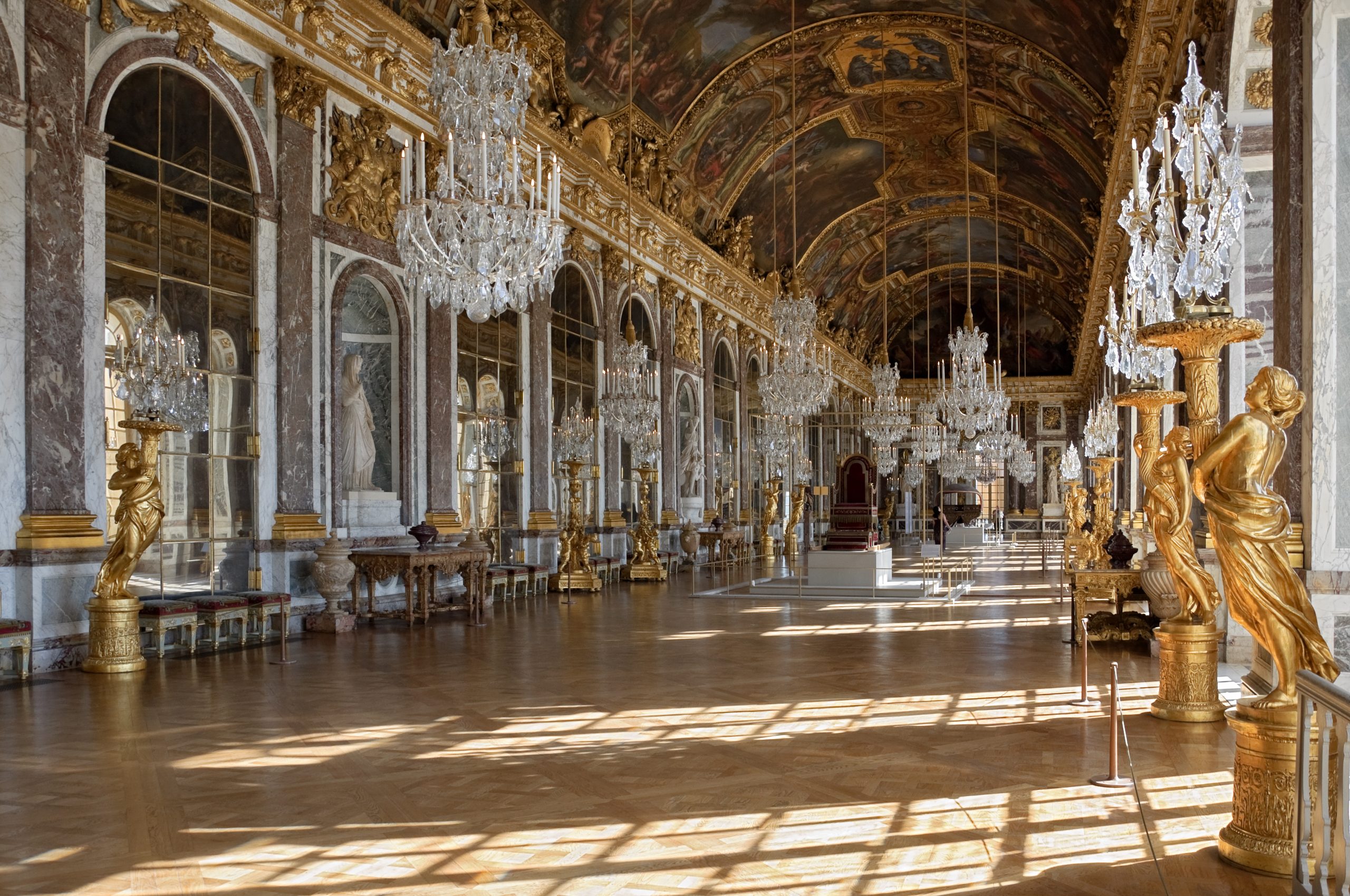 Many are unaware that there are actually five Versailles Hall of Mirrors in the world.

The first is outside of Paris at the Palace of Versailles, built by Louis XIV, the Sun King, to evoke his absolute power.

The second is a half-finished replica of Versailles on an island in the middle of a lake in Bavaria (Herrenchiemsee), built by King Ludwig II, who was obsessed with Louis the XIV and often pretended to be him.

The third is in an Orlando home in its eighteenth year of construction, being built by a timeshare magnate and his wife and featured in a 2012 documentary, Queen of Versailles.

The fourth is in the main dining hall of Miami’s famous Cuban restaurant, Versailles, built by hunger for its iconic food (and where I would celebrate the closing of every show with the Cuban Classical Ballet of Miami; stories for another day).

The fifth is today’s markets.

In 2004, Ben Bernanke, who was a member of the Federal Reserve Board of Governors at the time, gave a speech titled “What policymakers can learn from asset prices.” It is now often called his “Hall of Mirrors” speech.

In the speech, he discusses the different indicators that might reflect how the market views monetary policy in relation to the economy, including the slope of the yield curve, Eurodollar futures and market based inflation expectations derived from inflation-linked securities prices (called breakevens).

But when discussing how the Fed should use these market based indicators, he argues that they should not have a direct impact on policy and should only be used as a feedback on how well the Fed is communicating:

What do markets expect about the future course of monetary policy? The question is important to policymakers, not because we are concerned necessarily that we should meet the market’s expectations – such a strategy quickly degenerates into a hall of mirrors – but as a check on the efficacy of our communication. If the policy expectations of the market differ significantly from the policy expectations of central bankers, then the two leading possibilities are, first, that the policy committee has not accurately communicated its outlook and objectives or, second, that the market hears the policy committee’s message but is skeptical of it.

The problem with this assertion that the Fed can set monetary policy in a market-less vacuum (they will call this being data dependent) is that when the Fed has ignored the market pronounced risk asset weakness has ensued.

Two Examples from the Last Cycle

The Fed began tapering asset purchases in 2014. Other major central banks, mainly the ECB and BOJ, went the other direction and began easing later in the year, resulting in a sharp strengthening of the dollar, a tightening of financial conditions, a crack in commodity prices and the kickoff of the industrial recession.

Ignoring the acute weakness brewing in the economy, the Fed kept on its path of tightening, with an interest rate hike in late 2015 and committing to three more in 2016.

Markets tanked to start 2016 amid this Fed promise of tighter policy in the face of weaker growth. It took a 13% correction in the S&P 500 to get Yellen to back off the planned interest rate hikes. This promise for less restrictive monetary policy sparked a bottom in equites, credit and commodities and set up for the 2017 period of “global synchronized growth” fueled by the recovery from the industrial recession.

Through 2018, the Fed assessed the economic landscape as healthy and robust. Inflation (as measured by the Core PCE) had hovered slightly above the Fed’s 2% target for much of 2018, while unemployment was nearing 50-year lows.

This led the Fed to hike rates four times in 2018 and allow its balance sheet to contract, or runoff (meaning it would not reinvest the proceeds of maturing bonds purchased during quantitative easing).

The bond market also began to play a game of chicken with the Fed.

As the Fed continued to promise tighter policy, the yield curve got flatter and flatter, threatening inversion.

The flatter curve was a warning the Fed that its policy was becoming too tight for the underlying economy (which arguably had become increasingly sensitive to interest rates, a theme we have discussed in detail in our work on leverage).

By December 2018, the curve had flattened significantly, with the 2s10s spread was 15 bps and the 2s5s was already inverted at around -1 bps.

Despite these warning signs from the market, Powell gave his catastrophic “balance sheet in runoff” speech in December 2018, signaling that tightening would continue, despite the market’s warnings. This resulted in a swift, 20% market meltdown over the month.

After this sell off, Powell quickly had to walk back his comments on tighter policy, sparking a powerful rally in risk assets.

Just like 2016, when faced with market weakness, the Fed could not resist joining the dance in the Hall of Mirrors (meaning taking their cues on policy from the market).

Today’s Markets: Never This Flat with This Little Fed Action

Powell’s comments last week about abandoning the “transitory” term and opening the door to a faster taper (and thus possibly earlier rate hikes), briefly spooked markets and brought up many comparisons to 2018.

The reality is that we are a long way away from December 2018’s point of maximum pain for the market, when we had a nearly inverted yield curve with the Fed staying very hawkish.

Today the 2s10s is at 78 bps, higher than December 2018’s mid-teens level, but still meaningfully low for where we stand in the Fed’s tightening cycle: the 2s10s spread has never been this low without the Fed already having started raising interest rates!

Yet again, the market is moving ahead of the Fed.

The question presents itself: as we go into 2022, will the Fed downplay the signals of the market, like it did in 2016 and 2018, risking market volatility, or will they return to the Hall of Mirrors and set the path of policy based on market signals (like they did after the volatile market experiences of ’16 and ’18)?

But now we have the interesting wrinkle of higher inflation. 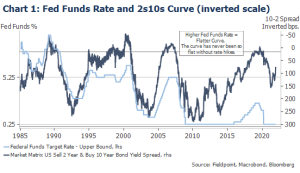 If elevated inflation persists and the Fed decides to react with tighter policy, how many interest rate hikes will the Fed actually be able to do before the curve inverts (we can also ask the fair question of how will interest rate hikes actually impact today’s inflation drivers, like supply chain constraints): The 2s10s curve is already at a mere 78 bps after just one month of tapering, compared to the start of 2018 when the curve was at the same level but the Fed had already ended QE and hiked rates five times.

This already flat curve is why we see it as unlikely that the Fed can reach its target terminal rate of 2.5% for the Fed Funds policy rate this cycle.

But this also invites a fair and yet startling question: with the curve already so flat, will the Fed be able raise interest rates at all this cycle before the curve inverts? 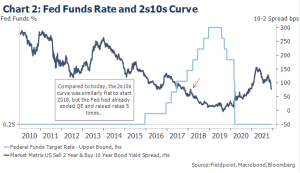 Given the market is ahead of the Fed again, we see potential for the market to essentially do the Fed’s own tightening.

We expect inflation to continue to surprise the Fed to the upside (see inflation framing here for background).

This higher inflation can continue to spark more hawkish commentary from the Fed, including an acceleration of tapering, and putting further downward pressure on the yield curve.

The market now has nearly 70% probability of three rate hikes in 2022, but if this curve flattening continues (along with the stronger USD and tighter financial conditions), will the Fed really follow through with the hikes, risking a repeat of early 2016 and December 2018?

If the Fed decides to return to the Hall of Mirrors, meaning taking its cues on policy from the market, there is a possibility that come mid-2022, it could look to the very flat yield curve and decide to back off on rate increases, hoping to avoid a market meltdown.

This dovish shift would then reverse the dollar strength and open up some interesting rotation opportunities (Value, non-U.S., commodities, etc.).

Again, this is a hypothetical path, but one whose probability of occurring rises as the yield curve continues to flatten.

We continue to see tighter Fed policy and tighter financial conditions putting downward pressure on equity valuations in 2022, with lower EPS growth not being able to offset this valuation compression as much as it did in 2021. We expect the result to be more volatile equity markets and lower total returns than we have experienced in the past three years.