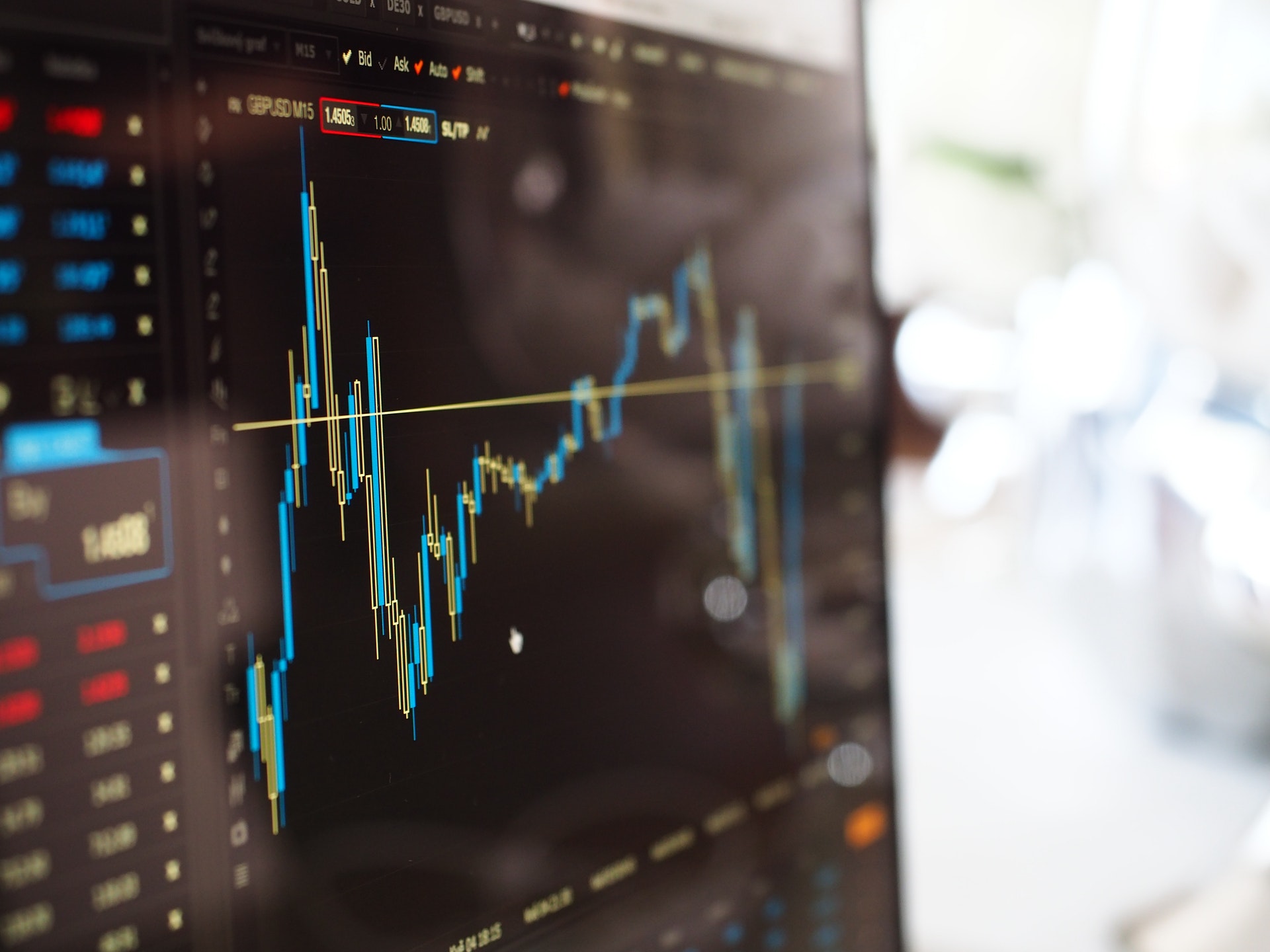 We’re going to spend some time with the Gallaghers today.

No, not that Gallagher (nice guy, though; my dad worked with him in the 80s and still can’t look at a watermelon without reflexively reaching for a poncho).

I’m talking about Liam and Noel Gallagher. The epic, dueling duo of brothers that fronted Oasis, the most commercially successful band to emerge from the prolific Britpop era of the mid-90s (if anyone wants to discuss the relative merits of Pulp, I’m game).

Under the surface of fame and platinum hits, Oasis was chaotic.

So, let’s embrace this chaos and take a closer look at what happened in jobs data, policy pivots, surging yields and tech earnings.

The Champagne Supernova of Jobs Reports

The lyrics of “Champagne Supernova” and last week’s jobs data have a lot in common: they are a bit surprising, no one knows what they mean and everyone has their own interpretation.

Friday’s jobs data release was a big upside-surprise (467k jobs added vs. 125k cons, despite the Omicron surge), but also a mess of statistical revisions. Instead of rehashing the data, let’s address the question on everybody’s mind: how did and will this strong jobs data influence Fed policy and markets?

Put simply: the strong jobs data all but guarantees a Fed rate hike in March, raising the probability of a 50 bps hike in March, and overall emboldening the Fed to continue to pursue a tightening of liquidity and financial conditions in order to combat inflation. 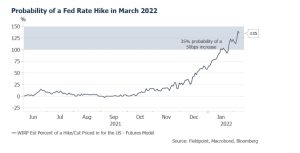 This has all of the market ramifications of shifting into a new phase that we have been discussing at length for the past few months: lower equity valuations, lower equity returns, different equity leadership (high quality and reasonable valuations outperform low quality and stretched valuations), wider credit spreads, higher yields (both real and nominal) and overall higher volatility. 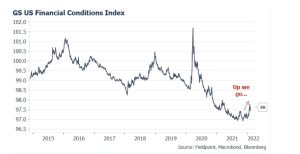 There are two key points from Friday’s data that support these assertions.

The first is that Friday’s release also included upward revisions to 2021’s jobs numbers, meaning the job market has been even stronger and tighter than previously thought and the Fed is even more “behind the curve” than previously thought.  There were an additional 217k jobs added for the full year for a total of 6.67m jobs added in 2021, with the majority of the upside surprise coming in the final months of 2021.

The second is that wage gains were robust at +5.7%. This is nearly double the +3% average pace of wage gains during the pre-pandemic expansion, a signal of just how tight this labor market is compared to the prior expansion. Powell acknowledged this in his January press conference, saying we have a “different economy than existed during the last tightening cycle,” and that he thinks “there’s quite a bit of room to raise interest rates without threatening the labor market.”

Overall, it was a strong report that supports the move to tighten monetary policy in the coming months (now to figure out how you can both slowly walk down the hall and be faster than a cannonball at the same time…).

All Around the World: Policy Pivots by the BOE and ECB

Following the Fed’s decidedly hawkish pivot in late 2021, both the Bank of England (BOE) and European Central Bank (ECB) surprised markets by shifting their policy outlook in a more hawkish direction last week.

All around the developed world, monetary policy is getting tighter.

For the BOE, the central bank raised rates 25 bps as expected, but revealed that four of its nine voting members wanted to raise rates 50 bps instead over concerns about inflation.

As BOE governor Andrew Bailey said in a press conference, “We have not raised rates today because the economy is roaring away… We face the risk that some of the higher imported inflation could become entrained within the domestic economy, leading to a longer period of high inflation.”

Raising rates is essentially an attempt to bolster the Pound by drawing capital flows into the UK, with a stronger currency helping to keep the cost of imports under control.

Raising rates can also be an effort to slow the economy, essentially destroying demand so prices do not spiral. This will likely have the pyrrhic effect of increasing joblessness, just as the cost of living is expected to surge (the UK has a planned 54% increase in home energy prices coming in April).

The UK’s set up smells a lot more of stagflation risk (meaning increasing joblessness and contracting growth, all the while inflation remains elevated) compared to the US, which continues to have robust demand for goods and labor.

In its own attempt to address elevated inflation, the ECB also pivoted hawkish last week. The central bank pulled forward its plans to end bond-buying stimulus to March, while President Lagarde also refused to repeat the December guidance that an interest rate increase in 2022 was “very unlikely”.

Like the BOE, there was similar dissent within the ECB, with some members explicitly calling for rate hikes in 2022 and an earlier end to QE (bond buying stimulus).

This caused forecasters and the market to quickly increase expectations for the ECB’s policy rate in 2022, and sparked a rapid repricing in European sovereign debt and credit markets, which is the topic of our next section.

Half the World (of Negative Yielding Debt) Away

Bond markets reacted sharply to the hawkish pivots out of the BOE and ECB. 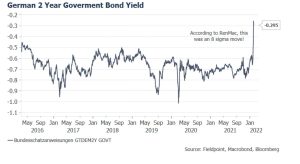 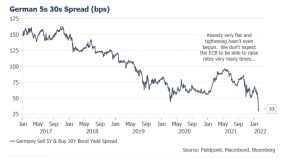 It was not just EU and UK yields that surged. Though the BOJ did not update its monetary policy guidance, last week Japanese 5 year bonds rose above 0% for the first time since 2016. 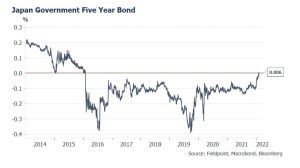 Rapidly rising yields caused the amount of negative yielding debt to fall by half in just one week! 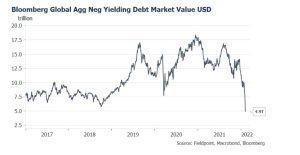 (For all of this talk of higher yields, we do note that The Economist’s title story for last week was: How High Will Interest Rates Go?. Magazine cover stories have proven to be great contrarian indicators and perennial “top tickers” of trades, so we’ll see if last week’s story precedes a pause in this yield surge. Time will tell.)

Yields for sovereign debt in European countries that have had economic and debt trouble (Greece, Italy, Spain) rose as well. With the ECB pulling back on bond purchases, these debt markets lose a “non-economic” buyer, meaning sovereign credit risks will have to be fully “assessed” by investors. These yields are still far below peaks reached during the 2011 sovereign debt crisis. 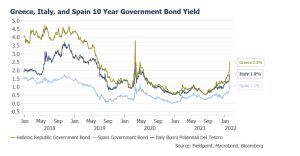 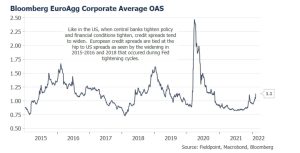 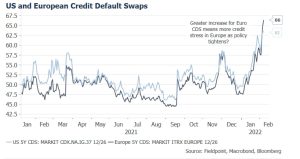 All of this further exemplifies that we are in a brave new world for liquidity. The days of increasingly easy and cheap money are behind us (for now). The days of being able to look through risks because of an incredible wall of liquidity are behind us (for now). And thus, what “worked” in the prior regime of extremely loose financial conditions is unlikely to “work” in the current, be it ever temporary, regime of tighter financial conditions.

That brings us to our last chaotic chapter from the prior week: Tech.

There are a few points to make here:

Just like the 2016 documentary about Oasis, Supersonic, there’s a lot to unpack here!

Overall, it is clear we are in a new regime. How long this regime lasts—meaning, how long can central banks get increasingly hawkish—is uncertain. For now, we have no choice but to embrace the chaos of this new regime.

Eventually things will calm and the market can sound like Liam Gallagher being asked about his post-Oasis life: “I’ve mellowed, but not in the sense of liking Radiohead or Coldplay.”

Have a great week!