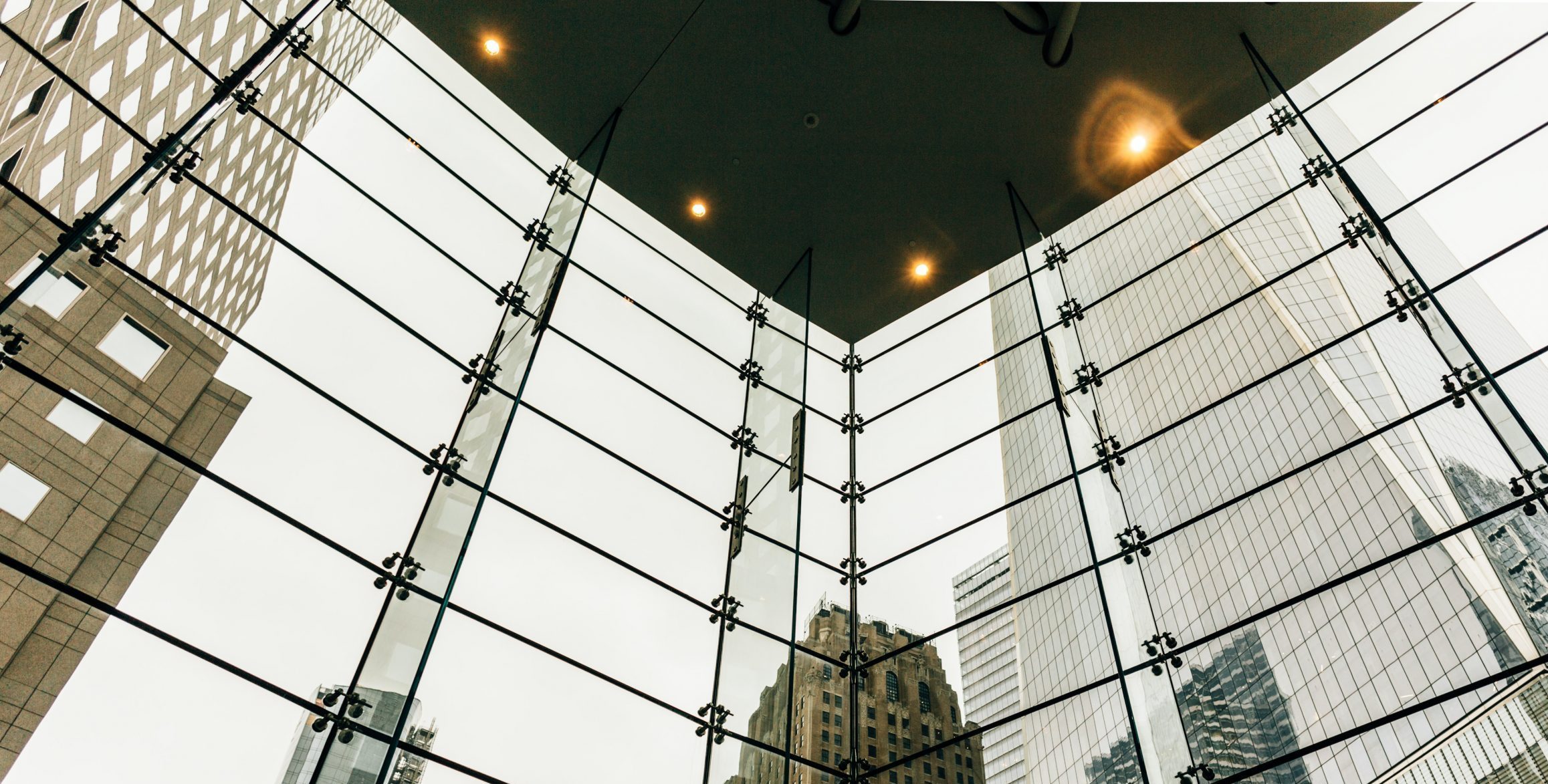 The State of Philanthropy in the United States 2021

A change of seasons can be a compelling time to take stock of the present by placing it in context with a receding past, and thus setting the stage for a future that continually heads our way. It is nearly impossible to find anybody who has not been affected to some degree by the circumstance and events of the current year. Yet in philanthropic spaces, despite strife, tragedy and privation, there continues to be progress, innovation and hints of transformation. In this article, we will discuss the state of philanthropy in the U.S. where it stands, its scope and its most important trends.

Many people act as philanthropists on a regular basis, but they don’t necessarily recognize or articulate it as such. According to Fidelity Charitable, one of the largest charitable entities in the U.S., if you are “a person who donates time, money, experience, skills or talent to help create a better world,” you are a philanthropist. Given this, just about anyone can be a philanthropist – regardless of status or net worth.

So what is the role of charity and philanthropy in society? This is a question explored in a 2016 article published in Thought Economics. In a series of interviews with a dozen individuals from a cross-section of backgrounds, a wide range of perspectives, wishes and aspirations come alive. Answers such as, “There is no single reason why philanthropy exists, but the main one is surely the wish of many to help,” remain relevant today.

The Vast Scope and Scale of Philanthropy

According to data published by the Urban Institute’s National Center for Charitable Statistics, the nonprofit sector contributed an estimated $10.5 trillion to the U.S. economy in 2016, composing 5.6 % of the country’s gross domestic product. There were roughly 1.5 million nonprofit organizations registered with the IRS, funded by a mix of government grant programs and private giving from individuals, foundations and businesses, as well as an estimated 8.8 billion hours of volunteer service from a quarter of the U.S. population.

The Corporation for National and Community Service (CNCS) reports that 77 million adults (roughly 30%) volunteered through an organization in 2017. Millions more supported friends and family (about 43%) or did favors for their neighbors (nearly 51%), suggesting that many are engaged in acts of informal volunteering.

The CNCS research also found that Americans are generous with more than just their time. Overall, half of all citizens typically donate to charity, with volunteers donating at twice the rate as non-volunteers. Nonprofit leaders take note – it is vital to keep your volunteers informed and engaged!

Giving by individuals dwarfs that from foundations and corporations, according to data gathered by Giving USA. In 2018 total private giving (excluding government funding) accounted for nearly 77% of the $428 billion in total gifts. 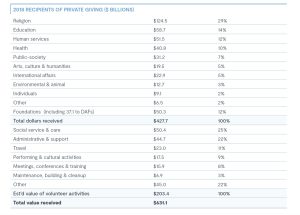 Annually, the Independent Sector, a consortium of philanthropic individuals and organizations, estimates and publishes an aggregate valuation of volunteerism. In the 2018 estimate, about 63 million Americans volunteered around eight billion hours of their time, talent and effort worth approximately $203 billion to improve and strengthen their communities through nonprofit organizations of all types. When the value of volunteerism is added to the value of cash and goods donated, total private giving in 2018 total $631 billion.

Who Are the Beneficiaries of This Generosity?

Of the $428 billion in private financial contributions received by the nation’s one million-plus charities in 2018, the 100 largest charities attracted 12%, according to the Forbes Top Charities list.

Religious giving topped the list. With nearly 77% of Americans affiliated with a religious group, according to the Pew Research Center, it isn’t surprising that congregations and religious organizations are the most commonly funded causes, accounting for 29% of all giving.

Next is education, most prominently colleagues and universities. One-fifth – $12 billion universities, according to the Council for Advancement and Support of Education. Foundations account for another $14 billion of college and university funding (including the family foundations of alumni) – with some of that funding occurring because of trustee connections.

Closely following education is a wide-ranging group classified as human services. These include services that promote volunteerism to address the needs of the disadvantaged, disabled and underemployed. Volunteers are a vital resource for charitable nonprofits, and without them, many charitable nonprofits would not be able to conduct programs, raise funds or serve clients.

The $50 billion that was contributed to foundations and donor-advised funds (DAFs) in 2018 represents future funding for charitable causes based on the intentions of the foundation or DAF account holder. The magnitude of this future funding is aggregated by the National Philanthropic Trust in their annual Donor-Advised Fund report:

The Rise of DAFs

While Donor Advised Funds (DAFs) have been around since the 1930s, they are now a material force in the charity world and are attracting increasing attention.

DAFs have been called “the thing that ate philanthropy” and “the most noteworthy story affecting charity in 25 years,” according to an August 2018 article in Forbes: There’s A Target On Charity’s Booming Donor Advised Funds.

Some detractors allege that DAFs are “warehousing wealth,” but a review of six years of data shows that there is a much more balanced story: DAF payout rates exceed those of foundations and have been rising. The ratio of grants paid to contributions received is also up over the last six years:

Foundations, on the other hand, can hire staff (including founders’ relatives), pay for office space, etc.

Despite having the option to give anonymously, DAF account holders are by and large quite transparent. According to the 2020 Fidelity Charitable Giving Report, just three percent of grants are anonymous – 88% of funding arrives with the donor name and address included.

A large part of the current appeal of DAFs is their open architecture:

Research Is an Enabler

The age of the internet and ubiquity of big data have brought the rise of the individual donor class, and a new ease with which nonprofits can be researched. The result appears to be donor confidence, as can be seen in data from the BB Wise Giving Alliance (aka Give.org):

The top factors for signaling that a charity is trustworthy include:

The pandemic has been a catalyst for short-term change in the power dynamic between charities and the entities that fund them. The big question being asked again and again is, will the change stick – or go even further?

For the past two decades, according to McKinsey, the trend in funding relationships has been an ever more data-driven and rigorous approach, making the process of seeking and managing grants quite cumbersome – especially for small, community-based organizations.

Nearly 80% of lean funders have changed their approach to funding as a result of COVID-19, according to Exponent Philanthropy. And, of those who have not, nearly 20% plan to change their approach in the next year.

Calls for a common application in philanthropy have been made over the past 20 years or more – and various platforms have been attempted but have not taken off, due to a lack of uniformity in processes and requirements.

According to surveys recently conducted by Exponent Philanthropy and PEAK grantmaking, 64% and 57% respectively of respondents replied that they had converted grants to general operating keep grants. Shifts in sentiment such as this, coupled with the significant evolution of big-data applications such as GuideStar and Charity Navigator may well set the stage for lasting change.

During trying times such as these, a body of research continues to suggest that gestures of assistance, often manifesting as simple, random acts of kindness can help assuage worry and concern on the part of the giver.

Helping others by performing good deeds provides a sense of feeling in control – even fostering a burst of euphoria called “the helper’s high” that comes when dopamine and endorphins are released in the brain. No doubt this is partly why half of adults report that they engage in acts of informal volunteering (or doing favors for neighbors) on an ongoing basis.

Maybe the day will soon come for the adoption of a universal philanthropic creed. The following quote, often attributed to John Wesley, could be a contender:

Such services are not deposits or other obligations of the Bank:
Are not insured or guaranteed by the FDIC, any agency of the US or the Bank
Are not a condition to the provision or term of any banking service or activity
May be purchased from any agent or company and the member’s choice will not affect current or future credit decisions, and
Involve investment risk, including possible loss of principal or loss of value.